Ireland ranked 12th out of 30 countries in the 2017 Melbourne Mercer Global Pensions Index (MMGPI), and was awarded an overall B rating.


While the Irish pension system achieved high scores for both the adequacy of the expected benefits and the governance standards applied, Ireland continues to lag in 20th place when it comes to the issue of providing sustainable income for people in retirement.


The report results indicate that action is required to improve the sustainability of our pension system, in order to protect Ireland’s ageing population and to combat the negative impact of low levels of occupational pension coverage.


Commenting on the report Peter Burke, Senior DC Consultant at Mercer in Ireland noted, “The results from the 2017 Melbourne Mercer Global Pension Index indicate that the time is right to develop a clear roadmap and timeline for the introduction of an auto-enrolment pension system to cover all employees.  As we are living longer and spending more time in retirement, this will help to ensure that the Irish pensions system can support the population in achieving adequately funded retirements”.


An Taoiseach, Leo Varadkar, recently reaffirmed his strong commitment to the introduction of a universal savings scheme aimed at increasing pension coverage amongst private sector workers.  He noted that a five-year roadmap for pension reform is expected before the end of the year with first payments being made to these new individually held funds in early 2021.  Mercer welcomes this commitment and looks forward to hearing further details of the scheme, in particular the minimum contribution rates, eligibility criteria and tax relief arrangements.


Mr. Burke commented, “Statistics indicate that less than half of Irish workers are currently saving in occupational pension schemes.  In light of the pressures that this puts on the state pension and the €560bn pension savings gap that this country faces, it is imperative that the 2021 target for increasing coverage and levels of pension savings are met.  In doing this we should adopt the best features of other systems from around the world and develop a robust yet simplified structure that delivers for our future pensioners.  We eagerly await the full details of the government’s auto-enrolment plans, including the important details on minimum contribution rates and tax relief arrangements.”


Now measuring 30 countries and covering 60% of the world’s population, this year’s ninth edition of the Melbourne Mercer Global Pension Index urges countries with unsustainable pension systems to take action now, rather than risk the need to take even more drastic action in the future.


Jacques Goulet, President of Health and Wealth at Mercer, stresses the need for countries to address sustainability when considering pension reform.


“Increasing life expectancies and low investment returns are having significant long-term impacts on the ability of many systems around the world to deliver adequate retirement benefits both now and into the future,” Mr Goulet says. “These pressures have alerted policy makers to the growing importance of intergenerational equity issues.”


Mr Goulet says Japan, Austria, Italy, and France are examples of developed economies whose pension systems don’t represent a sustainable model that will support current and future generations in their old age.


“This is due to a combination of factors including a lack of assets set aside for the future, low labour force participation at older ages, and significant demographic changes towards an ageing population,” says Mr Goulet. “If left unchanged, these systems will create societal pressures where pension benefits are not distributed equally between generations.”


Author of the report and Senior Partner at Mercer, Dr David Knox, says it’s not all doom and gloom; every country can be taking action now to move towards a better pension system.


“The primary objective of the Index is to benchmark each country’s retirement income system so we can learn to understand what best practice may look like, both now and into the future,” says Dr Knox. “From our research, it is clear which countries are leading the way in providing sustainable pension systems with adequate benefits and what others can learn from them to improve. Denmark, Netherlands, and Australia are three such countries which, whilst taking different approaches depending on their starting point, adopt a strong multi-pillar approach as highlighted in the Index.”


Professor Edward Buckingham at the Australian Centre for Financial Studies says that the report tells us that Australia’s pension system is good but there is room for improvement.


“Without the immigration of young people from other countries our ageing locally-born population would face significant challenges funding their retirement. The reason is simply that as we live longer, healthcare and public service costs will escalate and our society, like others, will face pressure to fund the needs of the old at the expense of the young.  Optimising the use of savings set aside for retirement is a perennial responsibility that demands strategic improvement of pension systems worldwide,” says Professor Buckingham.


“Besides demographic constraints the various frameworks we create to guide investment decisions include moral and ethical dimensions that will shape the nature of wealth creation and transfer.  This report contributes a uniquely global survey which provides a basis for articulating the merits and faults of many different approaches to these challenges."


Supported by the Victorian Government and bringing together the best minds in Australia’s financial services and research expertise fields, the Index is testament to Victoria’s dominant position in the superannuation and financial services sectors.


Mr Ken Ryan AM, Commissioner for Victoria to Europe says, “with a strong financial services sector and deep talent pool, Melbourne continues to lead the way in funds management, a central part of any superannuation and annuities system. The 2017 Global Financial Centres Index, released in September, ranked Melbourne in 13th place reflecting the progress the Victorian Government is making to ensure Victoria is recognised as a leading global financial centre.”


Some countries face a steeper path to system sustainability than others, and all start from a different origin with their own unique factors at play. Nevertheless, every country can take action and move towards a better system. In the long-term, there is no perfect pension system, but the principles of best practice are clear and nations should create policy and economic conditions that make the required changes possible.


With the desired outcome of creating better lives, this year’s Index provides a deeper and richer interpretation of the global pension systems. Having now expanded to include Colombia, New Zealand and Norway; the Index measures 30 systems against more than 40 indicators to gauge their adequacy, sustainability and integrity. This approach highlights an important purpose of the Index - to enable comparisons of different systems around the world with a range of design features operating within different contexts and cultures.


This year’s Index reveals that Denmark, in its sixth year running, has retained the top position with an overall score of 78.9, ahead of the Netherlands and Australia at 78.8 and 77.1 respectively.


New entrants to the Index, Norway and New Zealand, achieved credible overall index values of 74.7 and 67.4 respectively. Both countries were noted as having a sound structure, with many good features, but have some areas for improvement. Colombia, with an overall index value of 61.7, was noted as a system with some good features, but also a system with some major risks and shortcomings that need to be addressed.


In maintaining the integrity and relevance of the Index, two new questions have been included which has resulted in no country achieving the elusive ‘A’ grade. The first question addresses real economic growth in the sustainability sub-index, while the second question makes some allowance for voluntary pensions.


Naturally, the addition of a new question in the sustainability sub-index has resulted in the questions relating to assets and contribution levels having had their weightings reduced. Countries that have seen a significant improvement in their index value are those which have had high real economic growth during the last three years and where this is projected to continue during the next three years. These include China, India, Indonesia, Ireland and Malaysia. Conversely, countries with significant pension assets and high mandatory contributions but with lower real economic growth have seen a decline in their sustainability sub-index value. These include Canada, Denmark and the Netherlands.


“The Index is an important reference for policy makers around the world to learn from the most adequate and sustainable systems,” Dr Knox says. “We know there is no perfect system that can be applied universally, but there are many common features that can be shared for better outcomes.”


To find out more about the MMGPI 2017 Report, visit our dedicated webpage 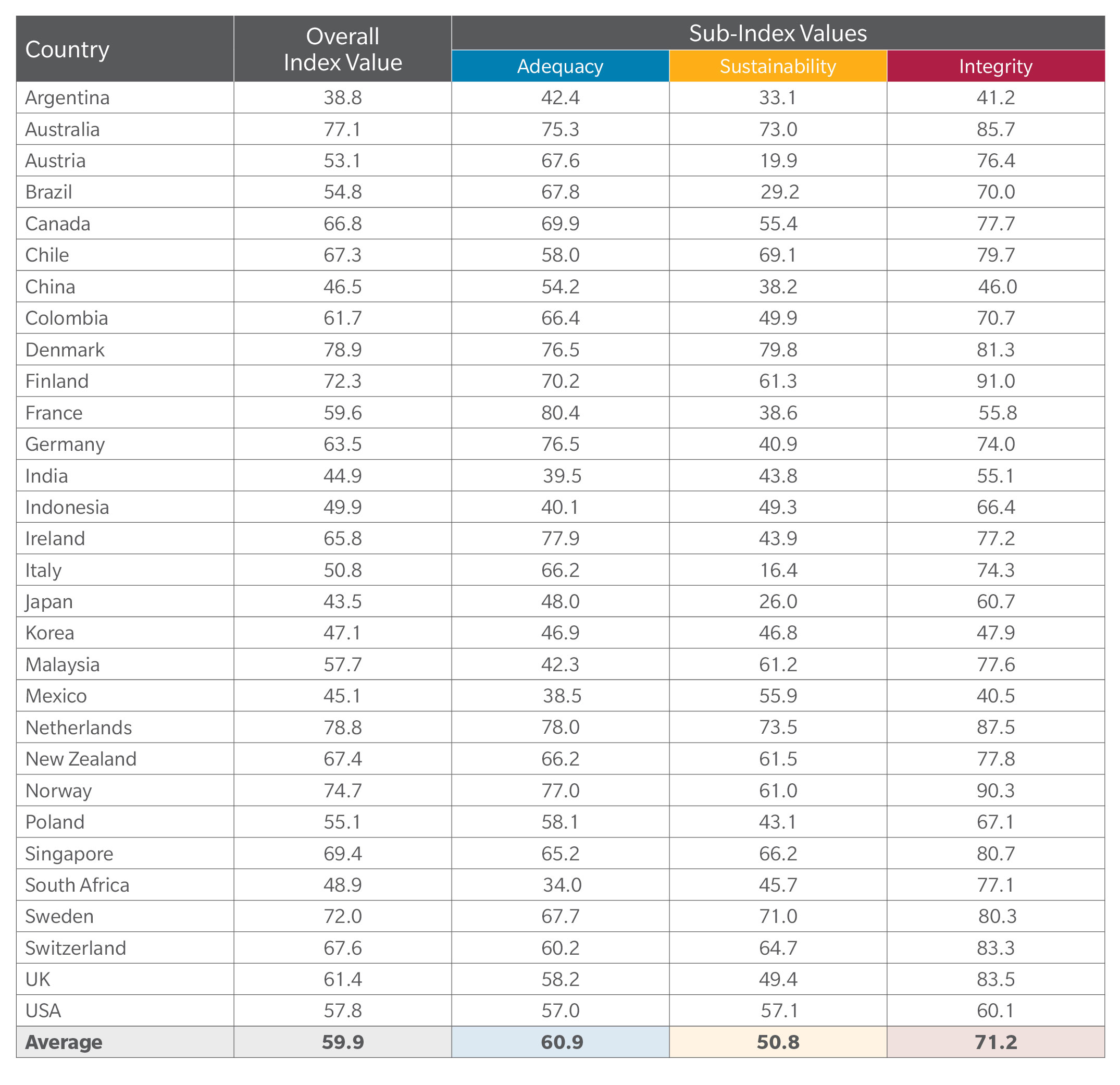 
The Melbourne Mercer global Pension Index is published by the Australian Centre for Financial Studies (ACFS), in collaboration with Mercer and the State Government of Victoria who provides most of the funding. Financial support has also been provided by The Finnish Centre for Pensions.


Mercer delivers advice and technology-driven solutions that help organisations meet the health, wealth and career needs of a changing workforce. Mercer’s more than 22,000 employees are based in 43 countries and the firm operates in over 130 countries. Mercer is a wholly owned subsidiary of Marsh & McLennan Companies (NYSE: MMC), the leading global professional services firm in the areas of risk, strategy and people. With more than 60,000 colleagues and annual revenue over $13 billion, through its market-leading companies including Marsh, Guy Carpenter and Oliver Wyman, Marsh & McLennan helps clients navigate an increasingly dynamic and complex environment. For more information, visit www.mercer.com.au.


About the Australian Centre for Financial Studies


The Australian Centre for Financial Studies (ACFS) is a research centre within the Monash Business School. The Centre was established in 2005 with seed funding from the Victorian Government and became part of Monash University in 2016. Its research is mainly funded by a range of corporate partners and collaborators and is accessible, evidence-based and independent, and aims to inform public policy, community debate and industry practice. This report with Mercer is an important example of the research output.


The mission of the ACFS is to support the essential role of financial services in the economy through evidence-based research, insightful dialogue and meaningful collaboration across industry, government and academia. For more information, visit www.australiancentre.com.au.


Trade and Investment Victoria leads the Victorian Government's strategy to increase the state's export opportunities as well as attract international business investment to Victoria to create Victorian jobs and grow the economy.

Victoria - The State of Momentum.