Investor insights Investment themes and opportunities in 2023 and beyond

The world is currently in flux across various fronts. A global economic slowdown amid monetary tightening precipitated a bear market, which was then exacerbated by a “summer of disasters,” conflict, and polarisation within and between countries. Governments around the world are facing sizeable challenges in managing the levels of debt built up over the past decade and especially the past two years. Inflation has continued to balloon above central bank targets, causing sharp rises in interest rates. At the same time, the conflict between Russia and Ukraine heightened the problems of complex and geopolitically sensitive supply chains and led to steep spikes in energy prices, particularly in Europe.

Three investment themes and opportunities for 2023

We have translated these experiences and developments into three themes for investors for 2023 and beyond, combining lessons from the 1970s with foresight fit for our new situation.

History rhyme: We assess current investment challenges, such as resources conflict, weak growth, spiraling inflation, monetary/fiscal tightening, in the context of the lessons learnt in previous years to equip investors for whatever comes next. We provide insights into inflation, the end of “free money” and the balance of power.

Position for transition: Against a backdrop of both increasing interest in sustainable issues and pushback against counterproductive sustainability culture, this theme suggests that investors are unwavering in their commitment to sustainability principles to ensure a joined-up transition. We provide insights into the “resource code”, the age of engagement and the mother necessity.

Modern diversification: This theme recognises the importance of good governance to enable investment committees’ to take advantage of opportunistic investments, dynamic diversification and the construction of robust portfolios (including private markets). Investors in the 1970s would have been envious of the toolkit available today. We provide insights on the private eye on the case, operational alpha and dynamic diversification. 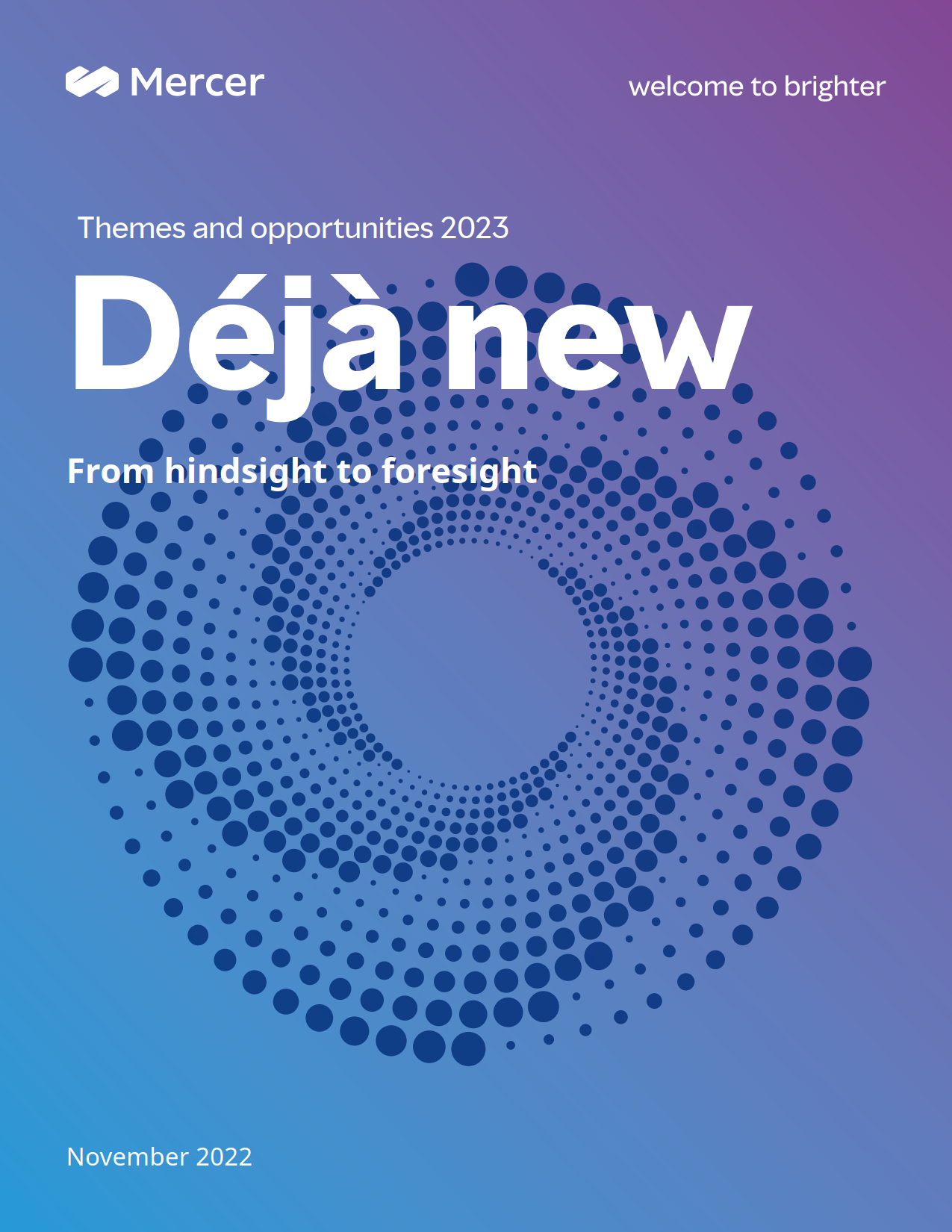 Explore the themes and opportunities

Download the report and listen to the podcast below to learn more about the three key themes which we believe will better position investors for success in 2023 and beyond.

"What if"? Should be the main question on investors' minds; in a world where potential outcomes are so dispersed, relying on the central case could be particularly dangerous. One scenario that investors should understand the ramifications of is one where we enter a higher inflation regime even after today's bout is over

Investment solutions to suit your needs

We can help you define, develop and implement your investment strategy.by addressing areas such as governance, risk, sustainability and diversification. We flex our services to suit your needs and help you achieve your investment goals.

We help you build a sustainable investment strategy that integrates environmental, social and governance (ESG) considerations; diversity, equity and inclusion (DEI) factors and seeks an optimal mix between positive change and favourable returns.

Leveraging our existing relationships with hundreds of asset managers around the world, we can help you identify and source new investment strategies, opportunities, ideas and innovations across private markets and hedge funds.

Become a member of the MercerInsight® Community today to get access to strategic research from hundreds of thought leaders around the world, including Mercer and third-party publishers. It’s complimentary and easy to join.

By subscribing to MercerInsight®, an alliance with eVestment, you can gain access to data, analytics and our forward-looking research on asset managers and thousands of investment strategies across both public and private markets.

Our Mercer Sentinel team can help you conduct due diligence and mitigate operational risks across your portfolios and strategies. We assess asset managers, custodians and other service providers to help you deliver on your governance objectives.

A world of investor insights Hear about the latest market themes, new ideas, opportunities and what’s shaping the future of asset management in our investor podcast series. Our specialists provide their point of view on the latest investor themes and market movements in our investor blog series. MercerInsight®, an alliance with eVestment Seeking to mitigate risk and drive adaptation beyond COP27

Use our investment solutions capabilities to help you reach your objectives

Speak to a Mercer consultant